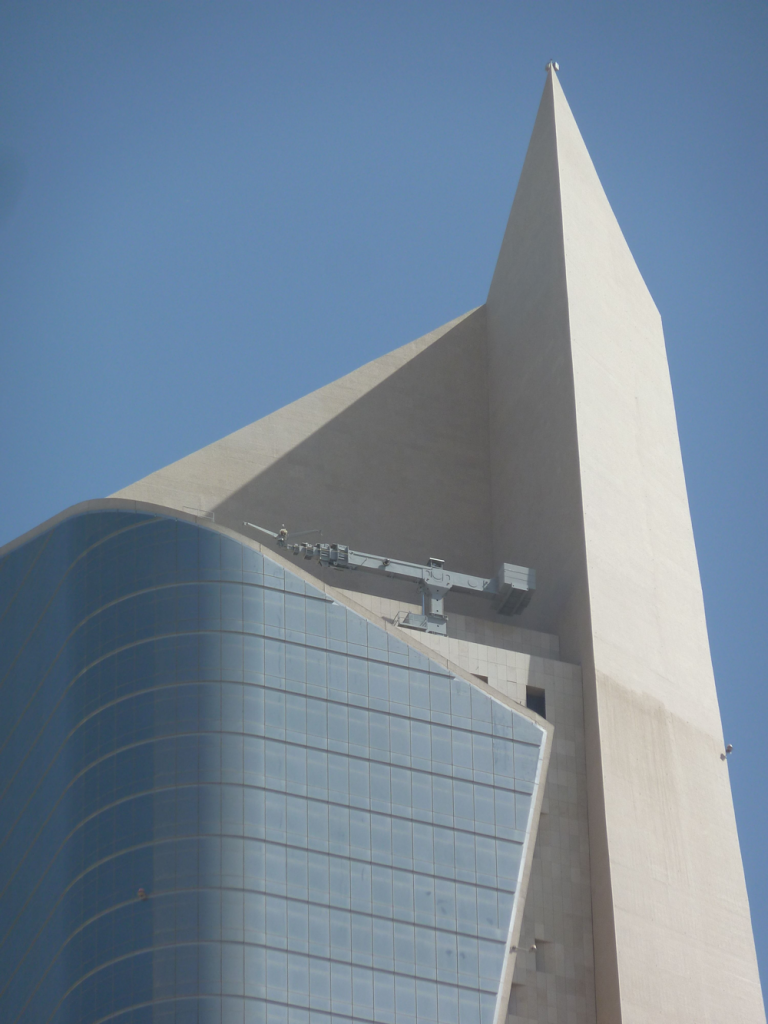 Manntech's building maintenance units access the different facades of the tallest structure in Kuwait, the Al Hamra Tower, without distracting from the building's aesthetics.

The tallest structure in Kuwait, and a national symbol, the uniquely designed Al Hamra Tower stands at 413 meters tall.

A central void, and floor plates that rotate counter-clockwise, expose the southern stone-clad, with angled windows designed to respond to Kuwait’s intense solar conditions, acting as thermal masses by collecting heat during the day and releasing it at night. On the other hand, the curved east, west, and north facades are made of vision glass to provide a clear view of Kuwait Bay and the city it surrounds.

Due to zoning requirements, and in order to maximise a 60-meter-by-60-meter site and maintain a 12-meter lease span, 25 percent of the building floor area was decreased. The building’s tapered wall results in access to the north, east, and west facades, while the southern stone-clad wall is maintained from a flat setback roof located at Level 74.

Dividing the Al Hamra Tower into two zones allows for safe façade access and maintenance. Manntech provided a series of hoist-mounted roof carriages and fixed-length cradles with adjustable bumper rollers are used for both zones. The glassed areas are accessed by a roof carriage, travelling on a series of inclined steel tracks in the building’s envelope at roof level.

Steel tracks located on Level 74 provide access to the southern façade windows below via mounted roof hoist carriages. Once a drop is made, the cradle returns to the top and the carriage moves to another location or is returned to storage.

Due to the tower’s height, stabilisation is required against forces such as wind, as the cradle traverses vertically along the façade. To achieve this, vertical guide track mullions are provided to engage the work platform during window cleaning along the glazed facades. To safely access the southern, stone-clad façade and other areas that may require unscheduled maintenance, intermittent stabilisation anchor buttons with lanyards connecting the cradle suspension to the façade are provided.

To access and maintain both facades, the primary structural integration of Manntech’s BMUs is through their connections with the track mounted system. Steel I-beam tracks are bolted to steel brackets embedded within the concrete on the roof.

The loading requirements for the BMUs are a marginal concern as the boom and carriage do not extend considerably beyond the parapet.

Shunting cars on the inclined tracked include their own safety mechanisms, involving a tension system consisting of a multilayer hoist system with two ropes. An independent spring-loaded safety brake is also installed, intervening directly to the bolted inclined track system.

Dedicated electrical sockets on each roof level provide power to the cradle and roof carriages, and hose bibs for water access from inside the building.

Weather permitting, the BMUs are generally in operation whenever possible. Nonetheless, the main environmental concerns are high heat and winds, with potential sandstorms or dust storms. Under the most extreme conditions, BMUs are inoperable.

The system for maintaining Al Hamra Tower is relatively straightforward, given the complexity of the tower itself. Neatly integrating into the tower’s form, Manntech provided essential services without distracting from the aesthetic of the building by capitalising on the sloping architecture of the roof to access all floors below.