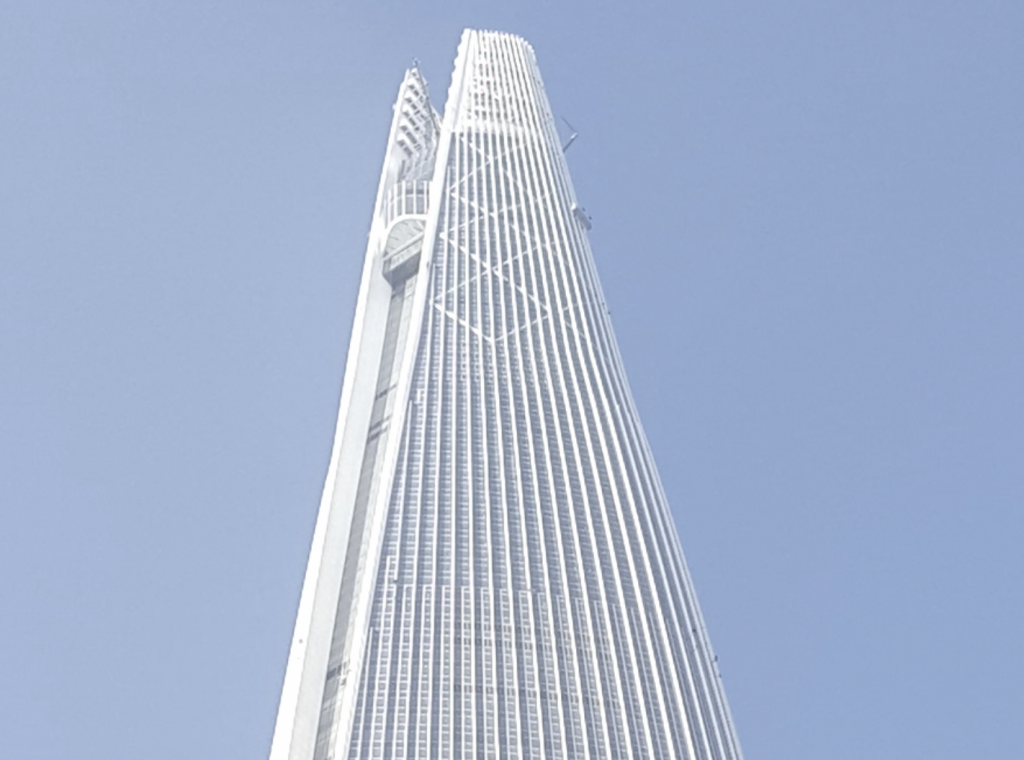 According to the criteria set out by the Council on Tall Buildings and Urban Habitat, the ‘supertall’ designation applies to buildings of 300 metres or more, while a ‘megatall’ building must reach 600 meters or over.

Manntech hold a well-earned reputation for pioneering advances in German-engineered building maintenance systems and a portfolio of customised solutions for the most challenging building access projects in the world. Based on this culture of innovation and problem solving, Manntech have been called on time and again to design and manufacture bespoke access systems for supertall buildings which push the boundaries of what is achievable in construction and require a building maintenance system to match their ambition.

Shanghai Tower is among Manntech’s landmark projects. This is the second tallest building in the world and one of the select few designated as ‘megatall’ at 632 metres and is also home to the first 3D climbing BMU to be installed anywhere in the world.

Ping An Finance Center, Shenzhen holds the title of CTBUH’s fourth tallest building worldwide at 599 metres and 115 storeys. Developing an effective building maintenance system for a building of this scale was a particularly important ingredient in the success of this bold project due to the unusual facade. In order to withstand the salty atmosphere of the building’s coastal location, the facade is made up of 1,000 tons of stainless steel, making it the world’s largest stainless steel facade. Delivering comprehensive building access coverage required no fewer than 13 Building Maintenance Units (BMUs). Not only was the scale of this building a significant challenge, but the architectural aesthetic was also a key issue. A wide range of customised BMUs including machines with single and double knuckle jib designs were developed to be concealed within the side of the building when not in use, while five additional BMUs with hinged jibs and a particularly compact parked profile are concealed by the pyramid spire.

Lotte World Tower, Seoul is designated as CTBUH’s fifth tallest building in the world and, once again, Manntech were entrusted with delivering a building maintenance system capable of meeting the demands of a supertall building. Beyond its scale, the slender form of this gently sloping, conical building also presented building access challenges which required a customised approach. Seven crane-type BMUs make up the complete building access system. The project called for four BMUs to be located within a very limited space within the building. Manntech were able to deliver BMUs which rotate inside the building to achieve a particularly compact parked position while providing the functionality demanded by the scale of a supertall skyscraper, with telescoping jibs and articulated arms.

Manntech’s track record of successful building access installations for many of the world’s tallest, record breaking structures is testament to our ability to develop innovative building access systems for each new challenge.

Back to news
Latest Posts
When is it time to replace a building maintenance system?
Building Maintenance Units are a vital part of a long term investment in the continuing success of any tall building, ensuring that cleaning, maintenance and repair work can be carried out regularly and reliably with sufficient facade coverage and functionality.
Continue reading...
Safety is an integral part of all Manntech operations
Manntech is world-renowned as a leading supplier of facade access solutions with a history of high-quality German engineering stretching back over 60 years and a commitment to continued innovation.
Continue reading...
Manntech dominates Architectural Digest’s Most Beautiful Skyscrapers List
As innovators of German-engineered facade access solutions, Manntech has the longest history of innovation in the building access industry. With over 60 years of experience in designing and manufacturing custom building maintenance systems, Manntech is proud to include some of the world's most architecturally ambitious buildings in its portfolio.
Continue reading...
Bespoke building access solutions for America’s most coveted buildings
As the innovator of advanced, German engineered facade access solutions, Manntech have been at the heart of many of the most complex and challenging building access projects in the USA. Two recent examples involved customised building maintenance systems for this huge country’s most attractive locations, from the bright lights of New York City to the sun-drenched Miami poolside.
Continue reading...
Manntech building access solutions preserving iconic global landmarks
The continuing success and viability of any tall building relies on an appropriate high-quality BMU system to provide for regular cleaning, maintenance and repair in order to ensure it can be kept in pristine condition for the enjoyment of owners, tenants, residents and visitors.
Continue reading...
Archive